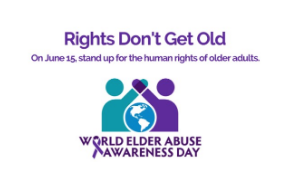 World Elder Abuse Awareness Day is held on June 15th and is an annual international observance day on the same date each year. The day came about as a result of UN resolution 66/127.
With a growing global population of elderly people, and as longevity increases, abuse of the elderly is an increasing and serious problem that affects health and human rights and can cause death, so it is vital to raise awareness of it and thus prevent it whenever and wherever possible.
Elder abuse is global and comes in many forms including physical, emotional, sexual and financial abuse and also neglect. Elderly people are human and deserve the same dignity and respect as people of all other age groups.
Elderly people are particularly vulnerable to abuse and to being unable to defend themselves and get help as fear and infirmity can be major barriers to seeking and getting help, and sometimes spotting and challenging abuse in the elderly isn’t easy, some are isolated having outlived family and friends, and some are abused in institutions where abuse is not spotted or is covered up, and in some cases the elderly are not given priority by authorities in abuse matters.
Weekly Posts